Marilyn Buck, straight out of Texas 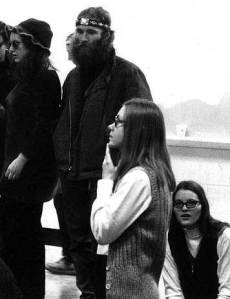 When I heard that Marilyn died, barely  three weeks after she was released from a lifetime in prison, memories from forty years ago sprang back to mind.

They were chilling times.  We were young.  We wanted change.  And the government had gone to war against us.  Terrible things happened.  When a  friend of “medium height, medium afro” suddenly became  a suspect in the murder of a cop, I knew we were ‘guilty’ until proven innocent.  I remember seeing a xeroxed copy of an internal document of the SFPD – a page full of mug shots, mostly young Black men, labeled ‘Suspected BLA terrorists’.   My friend’s photo was there.  And so was Marilyn Buck’s.

Back then, I felt suspicious of white activists who seemed to risk their lives  supporting Black nationalist or liberation organizations.  Like guilt was their motive.  Like they might take orders from  Stalin if he were Black.  But Marilyn’s history has roots I can grasp and respect deeply. She came straight out of Texas.  Her father was a minister who integrated his church during the civil rights movement, and the family got their share of cross burnings and midnight threats as a result. Marilyn’s story, for one, made me take a deeper ‘think.’

I never knew her in person, but I have friends who did. Good people who faithfully made the grueling visits to prison to be with her through these long years of isolation behind the walls.

When she died, I felt humbled.  Now I know her in a way I never did.  And she makes me proud for our times, our own small lives with giant-size hopes.  For the fighting spirits that rise from this broken land. Straight out Texas.  With John Brown’s spirit all the way.

The extended friends and family of Marilyn Buck, 1947-2010
View all posts by Blog admin →
This entry was posted in Personal Tributes. Bookmark the permalink.

1 Response to Marilyn Buck, straight out of Texas